The Tower of Babel in SamSkandinavisk

Here is my first attempt at the in SamSkandinavisk.

I started out this translation by researching the stories for 3 Scandinavian languages (4 if you consider Nynorsk another separate language), and also the stories in Icelandic and Faeroese. I also made sure that I compared multiple versions in each language.
I've tried to make a story the contains the barest essence of the story in all the majority of them. So my rendition might be a bit bare of embellishment and poetry compared to some of the texts that I referred to. Unfortunately I'm no theologian and it's another one of those bizarre Biblical stories that to this infidel makes no sense -- Jehovah at his typical weird, arbitrary and fickle worst.
Failing to understand the motivations of Jehovah or the children Adam, makes it difficult to achieve a definitive translation. Umm why did they need to build a big tower? Wherefore did the Lord become so wroth at the idea of humanity being capable and effective when they could communicate and co-operate with each other???? There's so much repetition in the story that I wonder if the at some stage during the original transcription, that the scribe fell asleep and lost his place :-)

Some words/phrases I couldn't decide on, so I've provided alternatives in brackets. I'm also becoming increasingly enamored with my version of the SamSkandinavisk orthography that uses umlauted vowels instead of "æ" and "ø". Somehow this system looks more unified because the umlauted vowels match each other. "ä" and "ö" look like part of the same system.
I hope it looks like bad Swedish :-)

I've finally been forced to do some research and write some rules that codify how to use nouns in SamSkandinavisk,
The document has lots of ugly tables, so it's too hard to post on this blog, but the file is available here:

It a document that summarizes the genders of SamSkandinavisk, the methods for forming plurals, for marking the genitive case, and when and if to use enclitic definite articles. If you read between the lines, it also covers most of the adjective declensions also.

I've aimed for a system that captures the essential common features of the Scandinavian languages, hopefully being slightly simpler to learn than any of the natural Scandy languages, and even more hopefully being no more complex. 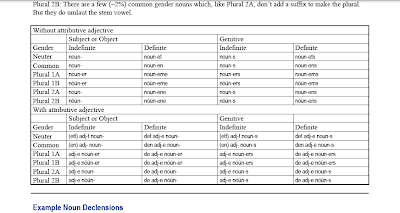 Posted by David Parke at 9:23 pm No comments:

After many hundreds of hours of toil, my SamSkandinavisk to English dictionary now has approximately 1500 words. And the English to Scandy dictionary has over 3000.

When I started work on SamSkandinavisk, I had come full circle in my Conlanging career; the first Conlang that I ever attempted (back in the 1980s) was a common Scandinavian language. I chose to work on SamSkandy because I am getting lazy and it looked like something potentially achievable. My other attempts at Pan-Germanic auxiliary languages have been very difficult. I think it just isn't possible to make a Pan-Germanic auxlang that is instantly intelligible to speakers of every Germlang. The best I hope for now is easily learn-able. But with the continental North Germanic languages, they are already partially mutually intelligible, so the point of the exercise with SamSkandinavisk is more to create a new,  neutral standard for inter-nordic communication. A fourth Scandinavian language if you will.

The design philosophy has been similar to that Interlingua. Irregular features that are not common to all 3 major Scandy tongues have not been included. But conversely, any feature that is common to all three is included regardless of whether it is irregular or difficult or not. This means that the grammar of SamSkandinavisk will, in theory, be simpler than the natural Scandy languages. But not by very much as it happens. Features that are common to all 3 tongues still let through some truly delightful irregularities.

Or take the SamSkandinavisk noun mann:

Or the SamSkandinavisk verb ta:

There is a fascinating sample of irregular and strong verbs, nouns that form plurals by umlaut, and more irregular adjectives. There is also still the common and neuter gender to learn.

The form of words is based not on the commonest form, but on the etymological prototype. That is, the form of a SamSkandy word will retain the most conservative or original features present in the 3 source languages. For example, the SamSkandy word høg (high) is based on Norwegian høy, Danish høj and Swedish hög. The choice of a final g is from the presence of the g in Swedish hög, this being the form that is closest to the ancestral form from which the 3 languages descended; Old Norse haugr.
Initially I started out basing the form of words on the commonest or the compromise form between Danish, Norwegian Bokmål and Swedish. But this was producing results that were very nearly always the same as Norwegian Bokmål. This was because Danish and BM are so similar in written form -- BM being almost a Norwegian variety of Danish. Choosing the prototyping method allowed Swedish forms to get more representation and make a language that is more conservatively "authentically" Scandinavian. Perhaps also bringing it's form fractionally closer to Nynorsk, Icelandic and Faeroese.

Anyway, this is the Conlang project that has been occupying the majority of my time over the last year. Links to the dictionaries are at the top of the "Useful Files" link list. I probably need to write a spelling/pronunciation guide to explain how words actually work.
Posted by David Parke at 11:16 pm No comments:

Soon we dwarves will finally defeat our current enemies and avenge all ancient dishonors. Then there will be a new golden age for the bearded race. If the men and the halflings know their place, they shall have the honor of serving us. The halflings will stir our porridge and bear our ale tankards. The men shall toil in our gold mines and fetch things on high shelves for us.

I hope this initial attempt at SamSkandinavisk is at least partially intelligible to speakers of Danish, Norwegian and Swedish -- the response I've had on Facebook has been fairly positive. It illustrates at least a few features of interest: Enclitic definite articles such as -en and -erne. Non enclitic definite articles using de and den.  Regular plurals formed with -er and irregular plurals such as mænnene for "the men" and ting for "things".

It's still a bit rough in places, the noun and adjective system needs some major work. I've not yet decided on some things that differ markedly between the source languages -- such as when to use enclitic definite articles and when to put them in front of the noun. And when and what declensional endings to put on adjectives. The Scandy languages have a blessedly simple verb system, but they make up with it by having an absolute minefield when it comes to nouns and adjectives.
Posted by David Parke at 10:01 pm No comments:

What is GoldenDict? It's a freeware dictionary look-up program. It allows instant one-click look-up of words and presents the definitions in nicely formated, hyper-linked form. It's available for various platforms including Windows and smartphones.
You can read about it on their website here: 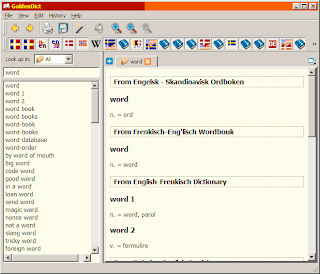 I'm recommending it here because it's free and it's able to read Babylon dictionaries. In my conlanging, for years, I have been making my electronic dictionaries in Babylon glossary format (.bgl). Bablyon is a proprietary software and happens to cost real money for a license. Now anyone on a tight budget can access my Bablyon dictionaries. I would say that it's not quite as nice or slick as Babylon, but it does the job.

http://www.babylon.com/
Posted by David Parke at 9:33 pm No comments:

This is just a quick test of embedding sound files into a PDF document of a dictionary. It's just a few words extracted from the SamSkandinavisk-Engelsk Dictionary. I've formated the words nicely and put clickable pronunciation guide for each word. It's mainly just an exercise for me to play with the interactive PDF features of Adobe InDesign 5.5.

NB If you just open the PDF on GoogleDocs, you will not be able to hear sound. Download the file to somewhere else and open it in Adobe Reader. If you click on the little speaker icons, you should get a speech example for each word. 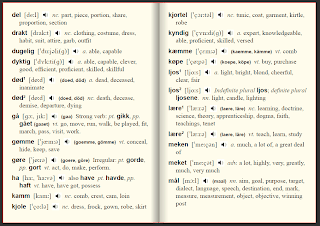 Posted by David Parke at 6:23 pm No comments:

SinPlatt Spoken by a Human

Here is a second attempt at the extract from De Kartuse fan Parma. This time it's spoken in my own sweet voice.
Posted by David Parke at 3:34 pm 2 comments: